A week ago, I asked this question about code editor UX design. The first response to this was an extremely polite moderators comment (since deleted) asking if I wanted it to be migrated to UX.StackExchange - this moderators comment was upvoted about 8 times. In my reply to this comment (also deleted) I recognized the overlap but pleaded for it to remain on the grounds that I wanted the advice of programmers first, before going to the UX designers. Thankfully, it was allowed to remain and I got invaluable help from both answers and comments.

Now, in the normal course of events, a UX designer would probably be given the UX problem (addressed by the question) first. They would then come up with some options and then test these out with developers, who might contribute their own ideas which the designer would consider, the process would then repeat.

Given that we can't really bounce questions and answers back and forth across forums, is it ok in principle, to submit UX-related questions to Programmers when they're related to the design of programmers tools?

My own view is that questions on programmers tools are high-risk on the subjectivity-scale. But, provided that they can be framed so as not to elicit too many "my tool is better because it does this" responses; they can produce informative, interesting, useful and even innovative answers.

As a tools developer these questions are based on real issues, either for now or the near future. I've listed some extremely raw questions below, to provide just a flavor:

Please don't get too distracted by the above 'sketch' questions - the real question is in the title. The idea is to establish a general principle, discussing the merits of the sample questions was not the intention.

Having said the above, the sample questions have be re-drafted with totally fictional answers for illustrative purposes only:

Q1. Which IDE feature or Code Editor feature has had the greatest influence on programming language design?

A1. Auto-completion. e.g. LINQ and other modern function languages require the subject of an expression to comes first so that auto-completion can be provided within that expression (different from SQL).

Q2. Which parts of IDE functionality most readily lend themselves to touch/gesture based interfaces and why?

A2. Operations within the IDE related to project files. Because gestures are efficient when managing large sets of objects in groups and also there's useful overlap with other touch-based applications that handle files.

Q3. What is the best way to measure/assess whether indentation of code within editors is more efficient in terms of screen real-estate usage than the alternative methods for conveying code nesting?

A3. Use the sample code from this [made up] website that implements the same algorithm using 3 popular programming langauges with each one following 3 different established conventions for code structure and formatting. Plot a graph showing the cumulative character space usage for these for each line of code. Then overlay this data with the equivalent space usage taken by the methods put forward as an alternative to indentation: 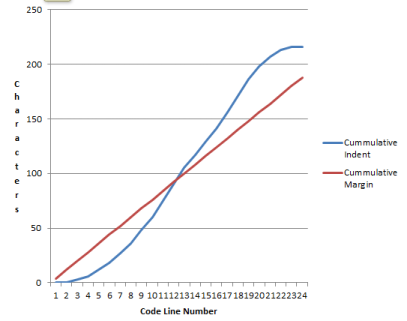 The value of the Stack Exchange network is in getting expert answers to specific questions: if there's a site that has an expert audience for the subject of a question, they are the ones you should be asking.

It gets a little murky when there's a topic that concerns another profession (i.e. your original question about code indentation): any UX professional worth their salt is going to ask/survey/test programmers in the course of their discovery. But a good UX professional also knows how to discern what's useful feedback and what isn't.

The code indention question is borderline (which is why a moderator suggested UX.SE instead of migrating it outright): programming is the one profession where code indentation matters, but it's still primarily a UX question, to which programmers don't have prima facie expertise in. It's got some good answers, so it's okay being here.

But it highlights the main point I'm trying to make: it's a judgement call, and borderline questions are decided not based on some rule of thumb or rubric, but based on the quality of answers they receive. If a borderline question is getting junky and uninformed answers, it'll be closed. If it's getting really great answers, it'll stay open and it'll inform future actions on questions of the same type.

So to summarize, while I can't give you a definitive answer on whether all UX questions relating to programmer tools are on-topic, I can tell you a few things:

As a postscript, while you don't want people focusing on the example questions you provided, the first two are not constructive and will almost certainly invite uninformed opinion and the third is definitely a question you'd want to ask a UX professional, not the people who will be the subjects of the test (programmers).

1) Which code editor or IDE feature has had the greatest influence on programming language design?

I don't this is constructive, at least as phrased. It's too open to every answer being equally valid and is likely just to result in a list of people's favourite IDE/language.

2) Which parts of IDE functionality most readily lend themselves to touch/gesture based interfaces and why?

I'm not sure on this one. While it is programmer focused in talking about IDEs I think it would be more suited to UX as the problem is not limited to the tools that software developers use.

3) What is the best way to measure/assess whether indentation of code within editors is more space-efficient than the alternative methods for conveying code nesting?

While this one is probably on topic, I'm not sure that it's a particularly useful question in these days of multi-gigabyte hard drives.

Not the answer you're looking for? Browse other questions tagged discussion on-topic-definition migration .