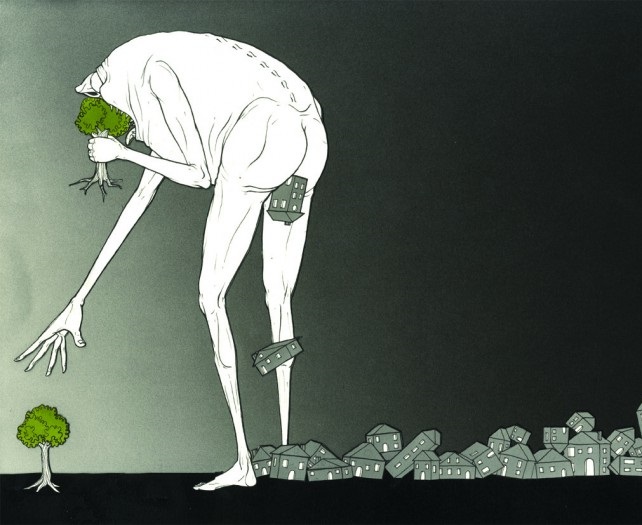 Image source: cagacemento. It says that We will die. Our civilization will collapse because american lifestyle (a household, preferrably with grass lawn, for every Earth citizen) is our new value. The problem is that it is pure waste and absolutely unsustainable. Read about suburbs.

I knew something about biology, but this was a graduate course. I could join this special, advanced course provided one thing--that I would do all the work, and report on papers just like everybody else. When the course began, Harvey started out by drawing a great, big picture of a cell on the blackboard and labeling all the things that are in a cell. He then talked about them, and I understood most of what he said. After the lecture, the guy who had invited me said, "Well, how did you like it?" "Just fine," I said. "The only part I didn't understand was the part about lecithin. What is lecithin?" The guy begins to explain in a monotonous voice: "All living creatures, both plant and animal, are made of little bricklike objects called 'cells'. "Listen," I said, impatiently, "I know all that; otherwise I wouldn't be in the course. What is lecithin?" "I don't know."

Feynman sorrows that biologists behave like mindless bots: they notice a familar keyword and respond with associated phrase, drilled into their mind by rehearsal. Seem is here. People take every chance to bog down the questions in empty surrogate demagogy with a goal to close the questions (closing issues is considered a virtue) instead of really answering them.

Here is another citation of Feynman, who explains how we ban the only way of substantial discussion by labelling it a "personal attack":

You see, when I hear about physics, I just think about physics, and I don't know who I'm talking to, so I say dopey things like "no, no, you're wrong," or "you're crazy." But it turned out that's exactly what he needed.

If you do not say rude words, you are civil and addressing the content. They seem to know that there cannot be any crap and therefore if you qualify the content as 'crap' or 'author is idiot' somewhere, you make a personal attack. Indeed, if you are tolerant enough to know that there cannot be any crap then there is nothing to discuss. Ignorance and tolerance are necessary components of common sense denial, imposed by our elites. Why? Capitalist elites make money doing disgusting things. They need to teach the society to avert the eyes from the crap.

I also care about the nature. Whereas sharing (vertical cities and public transoport) could save the planet, we have sense of perfect, aspired to private housing, cars and wasting more as demonstration of success, that kills our future. Find out what is The greatest misallocation of resources in the history.

This user does not participate in any other communities currently.

We respect a laser-like focus on one topic.

All Questions Answers
Votes Newest
-3 Why do programmers reduce MI problem to (4-point) Diamond rather than with (3-point) Joint? Jul 14 '15