Can this question be salvaged?

This question How to write maintainable event code in C#.NET? was closed by Robert Harvey (and deleted afterwards by others). I add a picture of the question for those lacking privileges to read it: 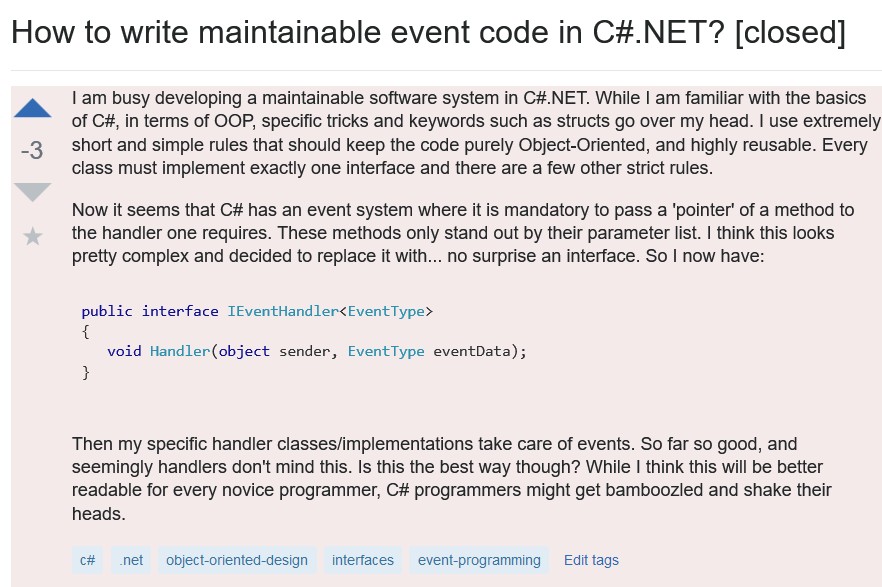 Though Robert gave a clear statement why he closed it (it contains the magic words "Is this the best way though", which can be problematic), I have issues to follow his argumentation. In my eyes, the OP already gave enough criteria what he means by "best":

Robert asked for "specific, objective criteria". Maintainability and readibility are often to some degree opinionated - so do we now start to close and delete every question which asks about maintainability without giving a specific metrics for this?

Especially here in this question, a very specific use of C# was mentioned, which makes IMHO the focus narrow enough in my eyes.

So any suggestions how the criteria for "best" in the question could be made even more specific as it already is? Or is this just about stripping the buzzword "best" out of it?

At first glance the question title and first paragraph screams “too broad”. But they also contribute almost nothing to the question and could be edited away (might invalidate the answers, though).

I see some more sensible questions that could be edited into more prominence:

Asking about maintainability and best practices in general really doesn't work. This is not necessarily a problem of topicality but of answerability – Robert's comment is on point, see also my opinions below. The question is not necessarily sufficiently limited by focusing on one language and one subject matter for these best practices: as long as the question is more of a discussion prompt, it doesn't work in the Stack Exchange model.

It can be expected that questions clearly work out a focused, answerable question, and don't just present an amorphous blob of confusion. Unfortunately, writing good questions is a difficult skill. In some cases, more experienced community members can seek to clarify the question in the comments and suggest edits.

This question saw substantial discussion in the comments that did unearth helpful insights about OP's understanding, but none that could be used to improve the question. OP's real problem was that they lacked first-hand experience that would allow them to contextualize advice they read on some blog, and that they were deeply confused about maintainability. But those are not software engineering problems that could be solved by one answer on this site.

Background on figuring out whether a question is answerable.

Many good questions are answerable because they pose a concrete, real-world problem.

To decide whether a question is on topic, I consider the typical answers it is likely to receive. This doesn't preclude that off topic questions sometimes receive great, on-topic answers.

The question discussed here received multiple such great answers, but about completely different problems. That too indicates (but does not prove) that the question is too broad.

Asking about best practices in general like “what are the best practices around X?” fails to present a solvable problem, unless there happens to be an authoritative document describing the consensus on X. For example, official styleguides sometimes cover best practices. But that is dangerously close to resource requests. In absence of such a clear answer, best practice questions are almost universally to broad because any answer that mentions a best practice would be “valid”.

As mentioned above, this can be avoided by asking whether some approach solves a problem. “Does this design adhere to best practices?” is not a problem in this sense, but “Does this design successfully enable some particular aspect of maintainability?” is.

When I read this question the first time I thought it fell into the category of: "person confused about X has invented solution Y, but want's confirmation that its good"

I don't think its the best question in the world. But if it was "What is the correct way to write event handlers in c#" it would go on stackoverflow and get a factually correct answer with links.

We are never going to be asked perfect questions. We are going to get people feeling their way and wanting help.

It's up to the answerer to pull meaning from the question and write something helpful. Simply deleting "bad" questions is not a good response.

Reopening now, wont solve anything with the question, as the OP has probably long ago moved on and only they know what they really meant.

But I do think its good content. Others will doubtless think of the same "solution" and google it. They wont get the microsoft page on writing event handlers. Because that's not what they want. They might well find this question, its answers and comments helpful though.

Since folks seem to continue to be confused about how I handle "best practice" questions, by way of illustration I'll offer a colorful metaphor.

We can't answer the first question, because we don't know what "best" means to the asker. The second question is clearly answerable: she stated a criteria. She wants soft cookies, not the crunchy ones you get over the counter.

That's all there is to this.

Now look at the OP's original question (paraphrased, for your enjoyment).

I find events in C# unmaintainable, so I added an interface. Is this better?

Well... we don't know the answer to that, do we? For starters, why did you add the interface in the first place? What sort of perceived benefits did you derive? Why do you think the interface improves things? And what do you mean by "unmaintainable?"

Now the OP goes on to say that C# requires a "pointer" to a method. In C#, we call these delegates. A delegate is a form of indirection. In that sense, it is just like an interface; it defines the method signature by which we can hook up a first-class method to an event (a handler) so that we can receive information when the event fires.

All of which begs the question, why do you need yet another layer of indirection? And we've come full-circle to the question I asked the OP in my original comment: "What additional value do you think this interface provides?"

Your own answer to the question essentially (and correctly) states that "you need to learn more and get better in C#" (in so many words). Which leaves me wondering, what value does this question-answer pair provide to anyone else?

6
is this question OK? ("how to be... without a CS degree")
5
Should "No Interview Questions" be added to our FAQ?
1
IDE Compilation question - I'm not sure why this is downvoted so much
3
Should this question be open or closed?
13
Why is this question wrong? (asking for the name of a specific practice)
6
Dupe holding a question that is more general
2
Would this be considered too broad/open ended?
5
How would you clean up a question asking if you've written readable and easily maintainable code?
9
What questions recently closed can be salvaged?
1
What can be done about the misuse of the "primarily opinion-based" close vote?