A history of question migration in tables and a graph

[Note: Most of this post was written before the name change and I haven't changed to Software Engineering. I think that's appropriate, since I'm looking backward to when this site was Programmers.]

[Note: This in response to a comment by gnat on Meta Stack Exchange asking for information regarding migrations to and from this site. It's being shared here since it may be of interest to the community.]

I wrote a proposed philosophy of question migration. My thesis is that migration ought to be thought of as a convenience for the OP when they ask on the wrong site rather than a tool to manage content. Given there exists a chatbot to detect mentions of programmers.SE in order to deflect potential migration/crossposting, it seems to me that this site is particularly concerned about migration.

As a baseline, here are some statistics for the entire history of the site going back to the very first question asked:

I'm just including at the top ten sites as there's a noticeable drop off in quantity after the top slot. As you can see, Programmers has received 5584 more questions from other sites (mostly Stack Overflow) than it has migrated away. A full 14% of the questions that have ever existed on this site began life on Stack Overflow.

But those all-time numbers hide an important story. Almost all of the migrations occurred before 2012: 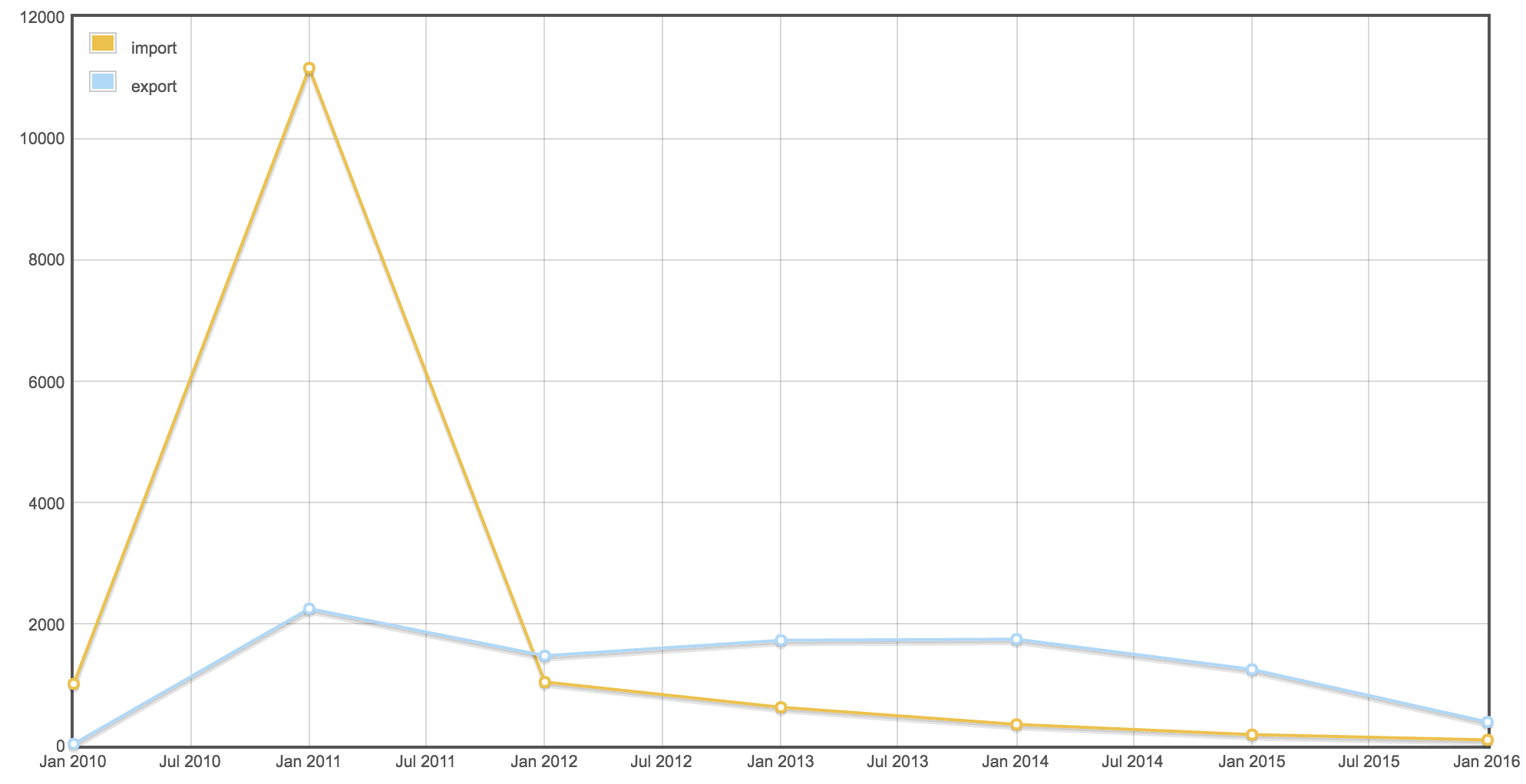 In recent years, Programmers has been a net exporter of questions:

I picked January 1, 2012 because it's a handy cut off, not because of any particular event on the site. The quality of incoming questions has been respectable:

Do remember votes from the source site are reflected in the score. For instance, questions migrated from Stack Overflow to this site had an average score of 5.8 and 1.1 answers. So score might be less useful a measure of quality than the fact that these questions got new answers after migration and are relatively less likely to get closed than organic questions.

That said, fully a third of the questions migrated from Stack Overflow have been closed or deleted. We don't have an easy way to quantify crossposted questions or questions asked at the prompting of misinformed commenters on another site.

I don't think that there's anything surprising in this data.

The Importing of Questions from Stack Overflow

The high number of imported questions from Stack Overflow makes sense. Software Engineering was originally Programmers, which was originally proposed as Not Programming Related. The proposal for Not Programming Related was for a safe place to ask the questions that were too centered on opinions or too broad for Stack Overflow. That didn't last very long, and the quality of questions led to a blog post on the Stack Overflow blog. This site was one of the main reasons for the Good Subjective, Bad Subjective and Real Questions Have Answers posts, and numerous Meta discussions about question quality.

This transition from Not Programming Related to something pretty close to what we are today spanned from the proposal on 3 June 2010 through the private beta that started on 1 September 2010 through a lot of the public beta which began on 8 September 2010. However, by our full launch in early December 2010, we had changed our scope to something closer to what it is today. This turmoil in definition was about 6 months, but wasn't clear to anyone who didn't participate on the Meta site.

One big problem with all of this turmoil was that, until a few days ago, we continued to have the same name and branding. To anyone outside of active participants on our community, they may not have been aware of the drastic change in expected question quality or scope. This is why Duga exists - to help us find people (primarily on Stack Overflow) who are blindly suggesting our site without understanding our scope. The things that should have made our scope change blindingly obvious to anyone - new subdomain, new logo - were flat-out rejected in June 2012.

Also in October 2012, migrations for questions older than 60 days were disabled.

2012 was a big year for stopping incoming migrations. It stopped users from sending old (and likely low quality) SO questions to us by taking away their ability to migrate to us and even stopped SO mods (who may not have understood our site) from migrating old questions to us.

The Exporting of Questions to Other Sites

Since 2010, our scope has been stable, for the most part. When we went live in December 2010 and were introduced to the world in a blog post, the things that were on topic here included software engineering, developer testing, algorithms and data structures, design patterns, architecture, development methodologies, quality assurance, software law, and business concerns.

However, some aspects of software engineering are better covered on other sites. Information Security, Database Administrators, Writers, Project Management, Computer Science, The Workplace, Law, and Open Source were all started after Programmers was, and these are all things that someone working in software engineering would learn, either as part of a curriculum or on-the-job. It's not that database design questions or data structure and algorithm questions or licensing questions are off-topic here, it's just that there are communities who can give better answers to these types of questions.

I think that part of this exporting culture may have been on us, as a community. When we shifted from the original Not Programming Related concept to Programmers, I think that we kind of normalized around the idea that we were actually a community of software engineers. Being primarily professionals, we wanted a site where the questions we had as professionals would be accepted without being lost in a sea of "fix my code plz" questions on Stack Overflow. There were already sites for writing and debugging code, professional-level system administration, using various computer software tools, mathematics, statistics, user experience, and a few other things that we cared about. So we include a variety of our professional concerns in the list of things that were on-topic. Until The Workplace came around, we had more tolerance of education and career questions. Before Computer Science, we took in some of the more theoretical/mathematical algorithmic questions. Before Law and Open Source, we took in a lot of law and licensing questions (but began to constrain that since we realized we weren't lawyers and couldn't answer all of these questions).

There are two good examples for migrations. First, we did a little experiment where the same question was asked on multiple sites. The answers were dramatically different. Here, they were very practical, focused on the quality attributes of the software (testability, readability, performance), and written in more plain English. On CS, they were more mathematical and focused on the theoretical behavior of the algorithm. Another example is Open Source and Law - the people there have learned more about and worked with copyright and licensing and the quality in answer is so much higher - just look at the answers here vs there in software license questions.

Ideally, we should be seeing this trend downwards. It may rise slightly if a new related site goes into a public beta or launches, but shouldn't really spike. At this point, we have a well-defined scope that focuses on the core aspects of software engineering without the tangential things. The main reason for this is that a lot of these tangential things now have their own communities in various states of development.

The Purpose of Migration

I disagree with the thesis that "migration ought to be thought of as a convenience for the OP when they ask on the wrong site rather than a tool to manage content".

Migration is a tool to manage content, just like deletion. However, unlike closure or deletion, it preserves the content and signals to the user "yes, you asked a good question, but although we can't give you a great answer here, you can get a great answer over there". By moving the good question, we help the asker get a solution to their problem and introduce them to a community of experts if they have a similar problem in the future. We help people who have the same question in the future have access to higher quality answers. We also add one more good question to another site that will help boost its discoverability by searching.

As long as we continue to uphold the rule of "don't migrate crap", we will probably be an exporter of questions. Our new name gives people a good impression of what we are about, but they may not be aware of niche communities that would be better for very specific questions. They may also not be aware of nuances between some communities, such as Software Engineering and Computer Science and the differences in answers.

Personally, I wouldn't mind seeing migration go away. A question is either on-topic or not and it doesn't need to be our concern if they get the best answers or not. We can use comments and other tools to let people know about other communities that exist. However, as it stands now, I have a tool that helps me ensure that the user gets the best possible answers for their questions, so I use it.

139
It's official! Programmers is now Software Engineering Stack Exchange
14
3 votes for closing/reopening experiment: the results
32
Change the name of Programmers to something that more accurately reflects the site scope?
32
New SE Chat Bot feature for identifying when Programmers is mentioned on Stack Overflow
2
Classification of questions

8
List migrated questions at the top?
8
The business of being a migration path for Stack Overflow
9
Which questions shouldn't have been migrated to Programmers, and why?
12
What can we do to help users understand our site better?
2
How long will migration candidates be held [on hold] until migration takes place
15
Migration path to Workplace?
6
CR isn't in beta - migration path to them now?