Why do programmers reduce MI problem to (4-point) Diamond rather than with (3-point) Joint?

I was allowed to ask at meta because my question was locked.

Probably I had to start with revising what programming mainstream tells about the topic. That is after all the core of my concern, inappropriate terminalogy, that I believe deep-rooted in the community. The first stop learning about MI is Wikipedia. The article is basically reduced to the Diamond problem and its mitigation. It is not surprising therefore that the most popular question at programmers, why do you hate MI also identifies MI problem with diamond problem. Google engeneers answer to that with a proposal to fix the language, propose fixes to the language saying that MI can be enabled through enabling the Diamond and give us an example with a simple join (3 points),

with Set and Sequence providing collection-specific toString implementation. My question however stems from the fact that this class hierarchy corresponds to 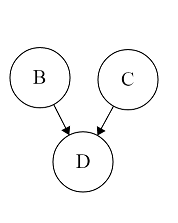 which is not a diamond because diamond. The diamond has 4 points 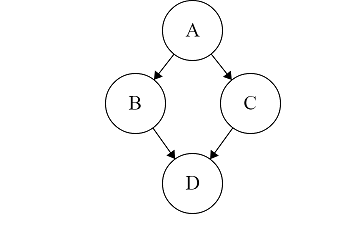 I have nothing left with but to read about the Diamond problem.

The diamond problem says that we get (naming) conflicts because D obtains two copies of same properties of A. And we see that programmers blame the common ancestor for the conflicts. However, question what if we inherit from card_deck and graphic, both of which have a draw method, what does it mean to draw the resulting object? (I had less far-fetched example with digital circuits in my locked question if you ask why do we need to merge deck with graphics) clearly demonstrates how naming clash without the common ancestor, simply, likewise Guava language demo above. Guava demo does not have the diamond problem. These are examples of having the naming clash, due to simple Join, without the Diamond. You can have naming clash without the common ancestor. But, the programmers seem to identify MI-caused naming conflicts with Diamond problem. For me, it is a logical fallacy, like saying that "all birds are ducks because we know that all ducks are birds". Indeed, all ducks are birds but I see that there are other birds, who are not ducks. Why do you keep telling me that pigeon is a duck, like Guava designers do? Why do you call something Diamond when Join is assumed?

I also suggested that Diamond may solve the problem, created by Join. In this light, reducing MI-caused naming conflicts to the Diamond problem is even more rediculous. Why do you do so? I ask only because I like order and feel really uncomfortable when everybody says white when black is demonstrated. How can you feel otherwise?

I would also ask why do you hate that question? How should I appreciate comments like this question cannot have the answer (how did you know? by closing the question?) or it was answered already or stop telling us the trivial things or it is not clear at all. And all these controversial attacks can come from a single person. I welcome only analysis of my question. This question does not let me sleep. How can I make it sharp?

It's hard to tell if you're trying to ask why your question got deleted, or trying to re-ask the question that got deleted, but I'm going to assume the former because that's what this meta site is for.

I only showed up right before this question got deleted, so I might have missed a few things, but I read the full question and the comments, and I agree with the deletion despite not having cast any of the votes myself.

What I first saw was a potentially good question ("Why do people claim the 'diamond' is such a huge, insurmountable problem?") buried under a significant amount of ranting and irrelevant information. I still believe this could be a good question, and I think I even know how I'd go about answering it. But it absolutely needed work before it could be answered properly, so putting it on hold until it was cleaned up was the right thing to do.

The problem was that the comments underneath the question descended almost immediately into a counterproductive argument, mostly because you reacted to the community's response with wild accusations about "taboo subjects" and "personal attacks" that had little to do with what they were actually saying or what was happening to your question. When that sort of thing starts happening, it's generally best to nuke the whole argument and let everyone cool their heads for a while, which is why I agreed with the delete votes. Now it's all water under the bridge.

I'd be happy to help you rework the question so that it can be asked and answered constructively, especially since you have the reputation needed to join chat rooms. It might also help to look at past questions about the "diamond", especially this one which seems fairly similar to yours.

For the non-10k users, a screen capture of the entire post: jpeg (I had to switch from png to jpeg and reduce the image quality to get it to fit into the upload constraints - it started out as a 4.4 megabyte file)

Now that we've got that out of the way and we can look at it:

I have difficulty identifying the actual problem. The question gives a bit of history, and then starts going into "I'm right" and "why does everyone (other than delphi programmers) not to notice this?" Beyond that point, it goes to some odd tangent of personal experience.

I can't find the question that can be solved. It reads like a giant blog post. The help center specifically calls out the types of questions that don't work in the Stack Exchange format:

This feels like a some degree of fit for #2, #3, and #5. The bit for #2 is that first part of "your answer is provided along with the question":

Why conflicts due to join are not a problem whereas Diamond, which I hopefully explanied very well is a solution, is a problem for you instead of Join? Why solution is considered a problem whereas the problem itself is totally ignored?

You've provided a solution to something, but I'm not exactly sure what that something is.

If I had close votes, I would have cast them as unclear too.

However, this question didn't end there. The comments immediately start out with:

As I expected, they will downvote and close the question. This is a taboo question. They silence the question to silence it. It would be stupid to let it come to the surface and discussed. – Recognize Evil as Waste 6 hours ago

and eventually gets to:

jonrsharpe expands unjustified smearing of my question (it is clearly a question, I wounder how you bend your brain to read it otherwise) with personal attacks. It seems that so far there was not enough dirt for me. – Recognize Evil as Waste 4 hours ago

The resulting post and comments are no longer suitable for a question and answer site and any hope of civil discourse (note that discussions shouldn't the focus of a question) are lost when Thomas Owens locks it down to try to cool things off and then decides that its really beyond repair.

Stack Overflow has their Minimal, Complete, and Verifiable example which goes to trying to clearly identify the problem in a way that is understandable by all.

This question fails at that minimal aspect with significant amounts of other material that I don't understand why its there. It gets into half adders and... well... there isn't an answerable problem there. As I read it, there is instead a manifesto of multiple inheritance and asking why the rest of the world is ignoring this solution.

This type of question really isn't a good fit for the Q&A format. Maybe you want to instead post such on other sites. It might work there. However, I would encourage you to not come out swinging and looking for a fight about taboo subjects (there not, we're just bored of them) immediately.

For Stack Exchange, please try to concentrate on answerable questions that don't take more than a few paragraphs to answer. Questions like the one you ask would take significantly more to refute (possibly into the 'needs to be a white paper' size) and if you're going to attack anyone who answers or tries to gain a better understanding of what you are asking you may get a similar reception there.

Not the answer you're looking for? Browse other questions tagged support specific-question .

44
Why was my question closed or down voted?
42
On discussions and why they don't make good questions

4
My question has been closed. I would like to understand why.
1
Is it okay to flag for moderator intervention attempts to circumvent question block at other site?
8
Why was this newly historically locked?
5
How would you clean up a question asking if you've written readable and easily maintainable code?
11
Why was "Why aren't young programmers interested in mainframes?" re-opened?
27
Am I being selfish by asking on-topic, yet very specific questions?
7
Does this site support questions asking to evaluate alternative solutions to a problem and if yes, how can I ask them?