Lets admit it, we've got lots of old things hanging around on meta. Much of it helps explain where we are today - and thats good. But it also confuses people. They may look at meta, search for some topic and find something from 2011 when the scope was still trying to be found. 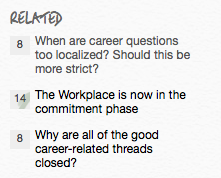 So, lets look at those that are actually here...

And the first one has something from '11 the apparent consensus is:

Yes, but only questions that will be relevant to a large number of professional software developers.

Which, well, is not at all the current consensus four years later.

The second one is also from '11 which include user8's blue bulls eye (which was recently removed from the help center because it was misunderstood) and states right up front:

Programmers is for questions about software development and being a programmer: career advice questions are off-topic here unless they uniquely apply to programmers.

Again, this is not the current understanding or consensus.

Thus, mods, I beseech you to create a new lock message that indicates that a given question was a part of the changing scope of the site and may not reflect the current understanding of what the site's topics are.

This question exists because it has historical significance about the development of the scope of Programmers.SE. However, this scope has changed over time and the reader is urged to seek more recent posts on this topic.

Then, as we find things on meta that are out of date and have the likelihood of being misunderstood or used to justify posts based on standards of half a decade ago it would be possible to say, "You know, that really isn't applicable anymore."

This could also be done as a custom close reason if you want to go that way instead, though that could put a bit too much power in our hands (locked questions can only be done by diamond mods, can't be deleted, can't be voted on).

I'd almost recommend taking this to Meta.SE and suggesting a better Meta historical lock reason that could apply to all sites. An example:

This question exists because it has historical significance, but it is not considered representative of the current policies of this site. This question and its answers are frozen and cannot be changed. More info: help center.

In some cases, if the answers have been superseded, perhaps we should be closing the older ones as duplicates of the newer one. The only problem with that is updating all the links when there's an even newer one. Fortunately, they would all become linked in the sidebar if we have appropriate Meta linkages.

8
When are career questions too localized? Should this be more strict?
7
Why are all of the good career-related threads closed?
0
Why was my career related question considered off-topic?

9
Lock the top-voted questions that are closed
47
What is the history behind the site scope change from NPR to "conceptual questions about software development"?
2
Meta for Mastering a programming language
8
Should the Close Reasons be added to the Help Center/On-Topic article?
2
Reevaluate the historical lock on "What are the things Java got right?"
5
Reevaluate historical lock on "Is Java “dead in the water” ..."
7
What topics are not "part of the SDLC" but are nevertheless still on topic?
3
Historical lock (or deletion) for these questions?