There are way more negative votes in the top 50 questions than positive. Time to think

I am a software lead in a company and I would say I am a seasoned professional. Nevertheless I find myself scared to ask questions here,

It is either that the site is attracting the worst programmers/question askers or the mods need to think about being less aggressive and let people ask questions.

This site is for giving free help to fellow programmers (brogrammers) not being elitist/perfectionist with others.

My apologies for taking a bit of time in getting around to answer this. The set of 'newest 50' that I am working from may not be the ones you saw. Let's look at all the down voted ones:

Often we get questions about implementation or debugging. Many times these are cross posted to both Stack Overflow and Programmers.SE. Other times, the question was posted here because the OP can't post it on SO for some reason or another. P.SE is distinctly different than SO in its scope and we aren't a "can't post on SO, post on P.SE" alternative site.

Asking for the best

And asked and deleted

So, there's the list and why they are down voted. We often wonder why we attract such questions, especially when we have many of these clearly spelled out in the Help Center for "please don't ask them". There is a suspicion that many of these are spill over from Stack Overflow (can't ask there, ask here) or a realization that Stack Overflow would close the questions, so you go down to the bottom of Stack Overflow and look at the sites... 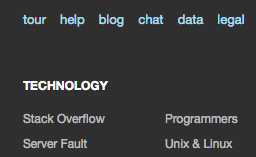 and lo and behold, there is Programmers right next to it. Let's try asking there.

If you believe that any of these should't have been down voted, are on topic, and not too broad or in otherwise need of fixing/clarification by the person who posted the question (we often fix those that have all the material, just poorly formatted), please point it out. If you think that some of these should be asked here and the policies and community norms are in error, please bring that up so that we can help by demonstrating the path that brought us here, and look at influencing people to make that change either by making exemplary questions of that type, or writing about it on Meta.

Until we understand what people feel need to be changed, it's rather hard to work off of "there are a lot of down voted posts on the front page". We know. We really try to help it and have probably done the most changes to our help center in recent times of any Stack Exchange site (we're going through another round of refinement - trying to make it more clear about what is and isn't on topic here). If you have suggestions about how to modify the help center, please help us make those changes.

The following is an excerpt from The Whiteboard chat room; a user asking for career advice. You can decide for yourself whether or not I was being too elitist/perfectionist. But ask yourself, as you are reading this: "is this a reasonably answerable question?"

USER: Hey guys quick career based question - I am more interested now in web development as opposed to software development. The only problem now is that the place I want to work at is using totally different technologies than I am using right now. My plan is to self-educate and start working on projects to internalize those technologies/new programming language syntaxes and then give it a shot but it would still be cool to find out what you guys think about switching in between the two? If you had any experience with it or if you think it is a good/bad idea in general.

ME: Hey guys quick transportation based question - I am more interested now in trucks as opposed to cars. The only problem now is that the place I want to work at is using cars. My plan is to self-educate and start working on projects to internalize those technologies/new truck beds and then give it a shot but it would still be cool to find out what you guys think about switching in between the two?

USER: I have heard some people say that it is better to stick with one stack of tech if you have been using it for a while but I disagree with that and wanted to see what you guys thoght.

ME: Depends on what you mean by "better."

USER: By better I mean mastering one stack and then moving on to others. My opinion is that some if not most of the things are trasnferrable but I am not sure 100% hence my question.

ME: Some of it is transferable, some of it is new skills. That's about the best answer I can give you, without a more specific question.

USER: At the very bottom of my explanation I asked if anybody had experience with this directly - that is moving from software dev to web dev and the challenges that came along with it. Obviously for each person it will be a bit different but since the situation is generally the same I can pick out some of the similarities to help me with my decision.

ME: I did my first ASP.NET MVC application about 7 years ago. I had to learn about REST, web services, the stateless nature of web applications, ORM, HTML, CSS and a bit of Javascript. The rest I already knew from having learned C#. Well, except for the intricacies of ASP.NET and MVC. Nowadays, having knowledge of front end Javascript frameworks like jQuery and Angular helps a lot. There's also caching, cookies, authentication, etc. So I'd say the transition is non-trivial.

So after a lengthy clarifying discussion, we finally got to something that is answerable in some way. But notice that it's still not a real question. Rather than asking a question that has an answer, he was asking "Everyone, share your experiences, and let me pick out the common elements."

That's not what we do here.

What he really wanted to do was solicit a discussion, which is fine in the chat room, as that is what it is designed for. But notice that the conversation never evolved into a real question that could be answered definitively. This is why we have such strict requirements for questions; they all originate from hard-won experience with topics that are subjective by nature, and the desire for newcomers to bend the site to their will and their existing forum skills.

There are a million and one other places on the internet where folks can have a discussion. This isn't one of them. And before you say "but this is where all the experts are," the experts are here in part so that they don't have to put up with the mindless discussion that forums encourage.

In my humble opinion, Programmers is not "elitist" (At least yet), but it is also not welcoming. At all.

StackExchange has a clear policy. First rule. Most important thing to consider, I believe:

Not complex, not detailed, not specific. Kinda "bad" in a programming sense. Still, meaningful.

My suggestion is: People with power should use it for good. Much like JSON License states that "The Software shall be used for Good, not Evil.", I think the intent of that rule is: "Before anything, try to help. Only of not possible, do something else."

Many rules reinforce that notion. Vote to close only if there's no way to salvage the question etc.

Career advice, best and lists are usually not helpful. Still, programmers is all about conceptual questions. To me that means:

To go with @MichaelT suggestion, I provided an answer to the JSTree question, the "not so bad", because I think it is REALLY interesting for MANY people. I built code to generate folder trees a lot of times. Ok, it probably should be on SO, but still, to think the concept of generating trees based on folder structures are of no interest to anyone else...?

What about carrer advice? Starting to learn programming, thinking about the implications of changing languages... Would those indagations not be meaningful to other programmers, beginners or not? And are they not conceptual questions about programming, in the broader sense of the word, considering not only the machine interpretation but also the act of creating programs itself?

I believe "best", "better" and "lists" MAY be evil. I also believe they may be the best way to talk about some stuff we can't avoid. Conceptually speaking, starting to study programming (Among lots of other stuff), is hard and requires a LOT of knowledge. Piles of it. Maybe lists. Let's suggest edits, let's help people fit the rules, or overlook when the question is relevant enough to others. Let's salvage as many questions as we can instead of simply kicking people out.

And if you ever actually find a question that will never help someone else or fit in the website subject, no matter how many edits, only then you should downvote or vote to close. Preferably just comment it's in the wrong place though, as downvoting scares people a lot, esecially when you have less than 100 rep. But I doubt we would have any of those questions around here.

Also, for the community leaders (Or anyone with a reputation in the hundreds and above): If we downvote newcomers instead of helping, because we have too many rep to spare, we will end up in a locked community, aging together, only to isolate ourselves, limit our knowledge and lose many amazing people that could bring a lot to this community. And I don't think anyone here wants that.

1058
Open letter to students with homework problems
46
Why was my question closed or down voted?
42
On discussions and why they don't make good questions
17
So many bad questions
32
Why are there so many closed, on hold, and down voted questions here?
11
Why can't we raise up questions quality?
14
Cutting down on off topic posts
11
Improve question quality by informing askers of expectations in some career related tags
43
Let's help askers who are trying to circumvent question block at Stack Overflow
10
'Problem' and 'help' titles in off-topic questions of new users coming from Stack Overflow
See more linked questions

23
Please let's not lock questions unless as an absolute last resort
8
When are career questions too localized? Should this be more strict?
5
Should a joking answer be deleted (or was it not aparent this was a joke)?
19
Too many upvotes for poor quality answers
0
Can we keep these questions open, but locked?
9
Lock the top-voted questions that are closed
2
Question closed because of "asking for advice on what to do"
17
Why are answers almost always upvoted more than the question
38
The number of votes required to close and reopen questions is temporarily reduced . . . for science!