Why can't we raise up questions quality?

I am a voracious StackExchange user, always I have a technical question I go to StackOverflow, also every morning I like to come here to programmer to read some more advanced questions and opinions about design stuff and programmer challenges (as opposed to programming challenges). I noted, a long ago already, that we have a great number of negative voted question. I can understand the motives. 1 2

But why can't we raise up the quality of the Questions? Look at this chart I extracted from data.stackechange. It shows the ratio of down voted questions to total questions asked that year. 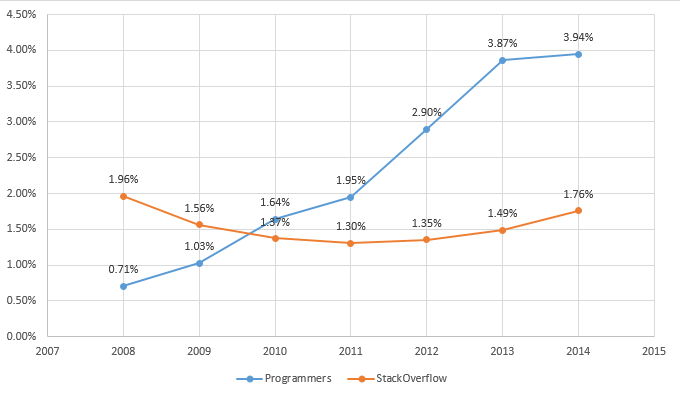 Despite its huge size, StackOverflow could, given the years control (and for some time, lower) the negative voted Questions. In Programmers in other-hand negative question have increased over the years (except in 2013-2014 period, where it appear to be controlled).

Part of it is trash questions, but there is also questions that are not in scope.

Right now the scope is detailed in Help -> Help Center -> What topics can I ask here?

Is it there? Yes. Is it good enough? Not really. If it were.. well then gnat's life wouldn't be as hard as it is.

That really isn't programmer's fault, thats just how all of SE is. It starts from position of assertion that you should read a help-center first. The fact that nobody does this hasn't been embraced yet.

Users learn what each particular site's unique interpretation of what is 'subjective' and what is off-topic by visiting one of the on-hold questions, or having one of their own questions put on hold.

So education usually comes after the mistake. SE might want to think about how to improve their UX in order to educate during question composition, instead of burying the scope three clicks deep or having to be linked to after a question is put on hold.

And yes I know this is already done when the cursor's focus is in the question title, but as we can see, that obviously isn't good enough.

We are inline with similar sized sites

There's an interesting chart there... but I draw issue at comparing P.SE to Stack Overflow. In particular, the size of the voting user base compared to the daily influx of questions can make most of the stuff on Stack Overflow get no votes at all (there's also a significant 'whine about down votes' and 'give sympathy up votes' (examples 1, 2, 3 (entirety of question in mouseover in case they are deleted)) culture on SO).

I wanted to see what similar sites to P.SE looked like - similar in terms of questions/day and overall size. This is what I came up with: 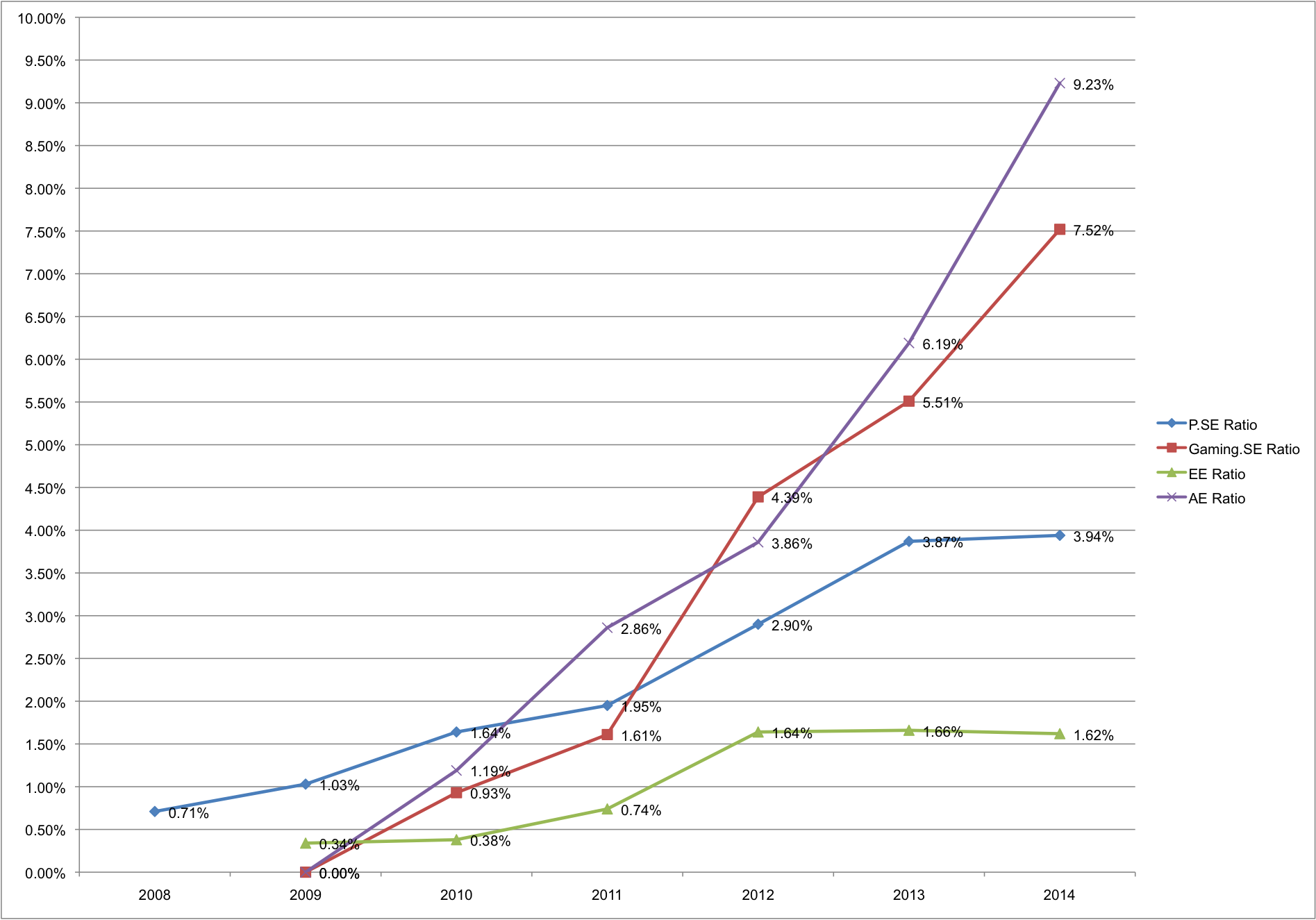 You will see that we are by no means the most down voting of the 30k or so question sites that I sampled (Gaming, Programmers, Electrical Engineering, Android Enthusiasts).

The question really is "what is EE doing right?" along with "what groups Gaming and AE together?"

Judging from this, I would suggest that if we want to have fewer down voted questions, it is would be necessary to restrict our scope drastically such that we're closer to that of Theoretical CS or Server Fault in what is allowed or not and take fewer soft questions; requiring all the questions to be at the professional software architect level.

I'm not sure that would be the right thing to do.

Furthermore, there's the conception on other sites (Stack Overflow, I'm looking at you) that Programmers.SE is for questions without code or for getting opinions. One can reliably go and find belongs on P.SE type comments on Stack Overflow (data.SE) for questions that don't meet the desired quality. The questions get asked here, and down voted, and, well, that's what you see. I contend that it is impossible for P.SE to stop the problem as there are far too many with this misunderstanding of P.SE's scope on SO and the best we can do is close, down vote, and educate people who post here under those conceptions (and, again, that's a non-negligible portion of the ratio).

One reoccurring theme that has popped up over the years is "maybe if we change the site's name people will post on topic questions?"

I'm pulling up the current newest questions page and listing all the questions with a negative score:

It is my contention that absolutely none of these would have been not asked if the site's name was SoftwareDevelopment.SE or SoftwareEngineering.SE. Every single question there would still have been asked. Very few of them had off topic votes. General topicality is not the problem with the questions (specific bits of 'tool recommendation' and 'career advice' still is).

We are long past the days of "what is your favorite comic" or "what should I name my cat" and the like. Those questions don't show up. Programmers is understood to be a site about software development processes.

The off topic questions that we get now are ones that very closely map to the topic of software engineering, but are issues that we are not qualified (as programmers) to answer. Career advice and legal being the two biggest ones. We also regularly get polling questions, but that isn't an issue with the site name, that is a misunderstanding of the Q&A format itself (and a failure to read the tour which shows what is on and off topic).

But there will always be people that suffer from the "herp derp oh look a textbox" syndrome, and no amount of renaming the site or amending the FAQ is going to fix that. -- Anna Lear

Your data is inaccurate because SEDE doesn't account for deleted questions but anyway, there are few factors worth thinking of.

In the past, Programmers were getting a reasonable mix of good and bad questions related to careers, software recommendations and code reviews. Even when topicality of these was slippery, well presented questions about interesting, real problems were considered worthy of upvotes by many readers.

Nowadays, we lost a good part but bad part remains with us.

I mean, users capable of asking good questions in above topics, eventually find their way and stick to specialized sites - TWP, CR, SR.

Another stream of low quality questions are those from users blocked / warned at Stack Overflow. Per recent stats, we're getting 4-5 delete-worthy questions a day from these folks.

In the past, they could pollute SO with their low quality stuff for months or even years but for last year or two, due to improvements in burning down SO close queue, they started hitting question blocks and warnings more and more.

If honestly, I can't see what we can do to help with the quality of questions like above, nor how we can control these in review queue.

We can't realistically expect askers of bad questions to "refocus" to specialized sites because at these sites, such questions seem to be detected and rejected even faster than over here. This is probably because of clearer, narrower specialization regulars at these sites build a better sense of what is good and what is not (at least that's how I feel at TWP).

I also can't imagine how it would be possible to make users blocked / warned at SO stop their attempts to leak through Programmers. I can't think of a way to tell someone facing a block message at SO that they shouldn't try their luck at Programmers.

Wait! You've recently been blocked (warned) at Stack Overflow. Consider that quality requirements at Programmers are similar. Note that Stack Overflow topics are not covered here and that your questions can't even be migrated to Stack Overflow because of the block.

Are you sure that you want to proceed asking question?

This is a ratio almost 2:1 down/upvote

Not the answer you're looking for? Browse other questions tagged discussion down-votes .

57
Renaming the site to match its FAQ or changing the FAQ to match the site name?
17
So many bad questions
32
Why are there so many closed, on hold, and down voted questions here?
16
On a name for the site and the questions asked
18
How many questions do we get from users recently blocked at SO, how many of these are closed / deleted?
3
Why so many negative votes here?
43
Let's help askers who are trying to circumvent question block at Stack Overflow
22
Could we please detect troublesome questions using Stack Overflow data and offload them to Triage review for an hour or two?
1
There are way more negative votes in the top 50 questions than positive. Time to think

20
Answers quality in hot questions
0
Why is this question not low quality?
6
Downvoting "marginal" posts can trigger their inclusion into Low Quality queue?
15
Bashing a programming language, a framework or other technology
32
Why are there so many closed, on hold, and down voted questions here?
3
Why so many negative votes here?
11
Why was "Why aren't young programmers interested in mainframes?" re-opened?