Migrating Crap to SO. Really, Programmers?

So there was this question asked by a new user. And it's undeniably crap. It is a code-dump showing 0 research effort, not even a problem statement. This is the prime example of what a crap question is. 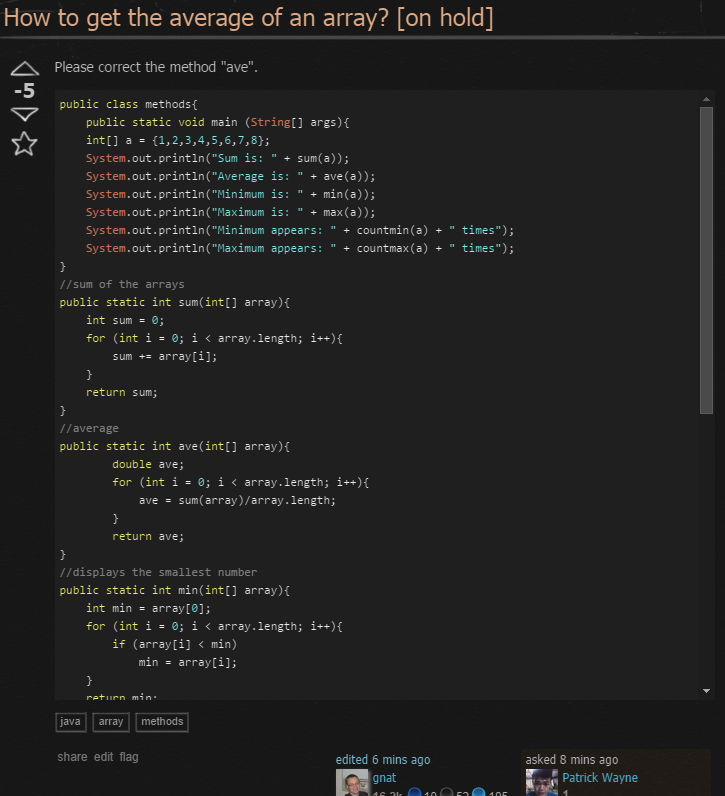 Now that question is on SO and the situation isn't any better. The question still is crap.

I know what you all are probably thinking right now: "Another mindless rant by a new user". Well you may think that way, and I'm okay with that, but I want you to ask yourselves a simple question:

From what happened to that question, this one definitely looks like a yes. And I think that is very sad.

Some users have even realized that this question should not be migrated. Please programmers-users, don't become mindless crap-migrating SO users and think before pressing the migrate button.

The specific question certainly isn't... stellar, but you are over-reacting. In fact, of the 258 questions we've migrated to SO (in the last 90 days), only 13% have been rejected. Conversely, the numbers aren't as good the other way around. We've rejected 16% of the questions SO has send us (but you don't see us complaining about it, do you? ;).

Next time you spot a shady migration, just vote to close it and move on.

Close voters at Programmers would better memorize the criteria for debugging questions to be acceptable for Stack Overflow:

Questions seeking debugging help ("why isn't this code working?") must include the desired behavior, a specific problem or error and the shortest code necessary to reproduce it in the question itself. Questions without a clear problem statement are not useful to other readers. See: How to create a Minimal, Complete, and Verifiable example.

As for the question in question, I for one picked the custom close reason that stated that question isn't appropriate at both sites. It was pretty sad to see how it was migrated against my will and I immediately voted to close the incorrectly migrated question using above reason:

This question appears to be off-topic. The users who voted to close gave this specific reason:

I think the migration is right.

The question is, let's be honest, utterly crap.

That said, such "flavour of crap" belongs to SO. Let's see the options the community at Programmers have:

While I fully endorse #4, I'll discuss also about the others:

#3 seems the most direct approach. It has the disavantages that it only makes sense for issues that happen often and that may be confusing to new users. If it is considered worth having such an option, it should be worded with extreme care

The only practical difference between #1 and #2 is that with #2 the OP will have to post the crap twice before he gets to understand what he should be asking and where. Hardly an improvement, and may discourage newcomers from using the SE forum.

Not the answer you're looking for? Browse other questions tagged discussion specific-question migration stackoverflow .

1
Please don't migrate crap to SO
1048
Open letter to students with homework problems
19
What Are Some Examples of Good "Guiding Comments" to Leave Users To Help Understand The Site?
10
Why are we getting so many off topic 'debug this for me' questions? what can we do about it?
15
Current state of the [job-market]
6
Is there any point in this site still existing?
14
Cutting down on off topic posts
16
close reason (and associated expand the close reason count) request
5
How can I write a good custom close message?
10
Using Programmers as "learning and training area" for Stack Overflow kind questions
See more linked questions

5
How are questions moved or duplicated between PE and SO?
4
Should we have a migration route to IT Security?
1
Personal Productivity is now in public beta - look out for new questions?
1
Coping with Community Decision to Upvote Rude Comments
32
New SE Chat Bot feature for identifying when Programmers is mentioned on Stack Overflow
10
Why are we getting so many off topic 'debug this for me' questions? what can we do about it?