When something is off topic here, on topic there, isn't up to the standards there and would get closed - the close reason being:

Questions asking for code must demonstrate a minimal understanding of the problem being solved. Include attempted solutions, why they didn't work, and the expected results. See also: Stack Overflow question checklist

I would like to see a new close reason along the lines of:

With this close reason, we might be able to avoid some poor migrations, giving close voters another sanctioned reason (people tend to avoid the custom reason for "this is off topic here, but not up to the standards there.").

That said, the reasons not to are:

Something that should jump out at you right away is the relative usage of the "specific programming problems" reason compared to "what language should I take up next" - even though the latter has now been active for about twice as long (4 weeks) as the former. Here's a crowded graph to curse at: 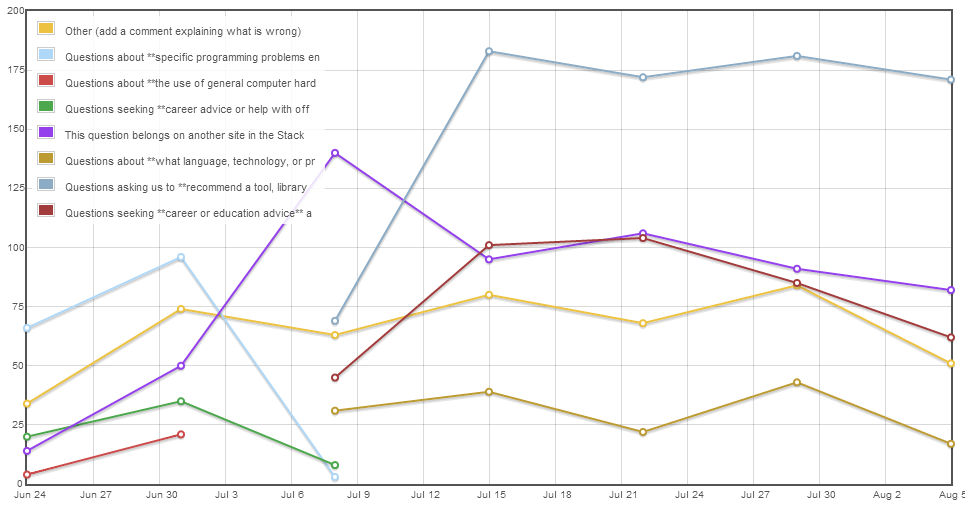 Note how the number of "belongs on other site" votes jumped as soon as "programming" was disabled?

I strongly recommend replacing "what language should I learn" with some variation on "you should ask this on SO, after you learn how to ask questions on SO".

One option for freeing up a custom close reason slot would be to combine "career or education advice" with "what language...". Possible wording is below.

Questions seeking career or education advice (including what language, technology, or project one should take up next) are off topic on Programmers, as they can only attract subjective opinions for answers. There are too many individual factors behind the question to create answers that will have lasting value. You may be able to get help in The Whiteboard, our chat room.