Does Rep Count for anything anymore?

Is this for real? W.T.F. I'd like to point out that vandalism was attributed to a real User, totally unacceptable.

Now its telling me "This post does not meet our quality standards". 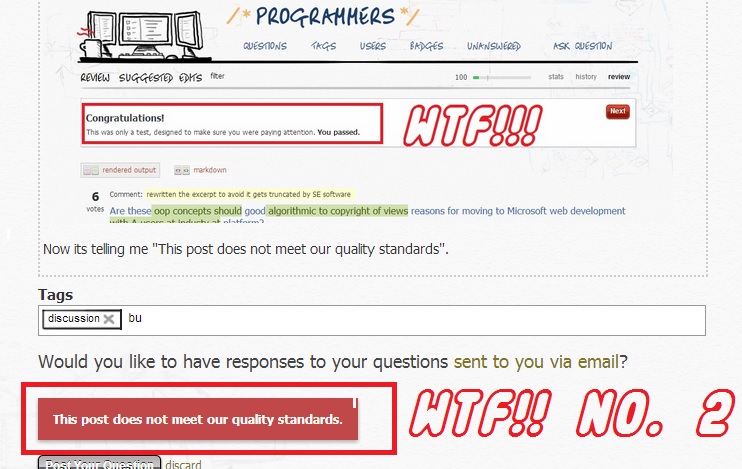 This is just insulting.

The issue has been discussed on Meta Stack Overflow. Clearly something is still going on. I'll look into it.

Not entirely sure what you're asking here, but... The various quality checks do take rep into account - beyond a certain point, it's assumed you know what you're doing in certain areas (code formatting, for instance).

The basic writing-style checks apply to everyone though. Complete sentences, punctuation, and enough text to reasonably explain a problem are universally important.

As World Engineer notes, suggested edit audits are temporarily attributed to a random recent editor - they don't actually appear in his activity though, nor does approval or rejection have any effect on him. Once you've completed the audit, the Community user will be displayed instead.

41
The Six Subjective Question Guidelines -- Enforcement Notice
2
Is a question asking for regex engine comparisons and benchmarks really off-topic for all of stackexchange?
10
We can't pronounce anything
2
Linking less popular questions in popular ones. Does this count as abuse?
1
What criterion of NARQ does this question meet?
1
Coping with Community Decision to Upvote Rude Comments
5
10k tools, automatic low quality flags and flagging
2
Does asking a question perceived as too broad warrant a down-vote / close-vote, without discussion?
0
What flag for an irrelevant comment?