Would you like to see Programmers get a less playful/cartoonish design to attract professional questions?

All the scribbly-doodles and the cartoonish font on Programmers seems to me like a reason people might assume from the start that this site is for more chatty non-professional questions.

Would it be worthwhile to try and get the site redesigned? Do you think this would cut down on low-quality questions, attract more professional questions or generally benefit the community now?

Historically I understand the layout was done for the site when it's main goal was different than that which it is now, and I think there is now a discrepancy between the site's purpose and appearance.

Would this however be detrimental? Is there precedence of any other SE sites that are up and going full-steam getting a makeover, which we could identify results of the endeavour from, both pro and con?

There are a lot of things I don't like about the site's design, to the point that I'm using a stripped down version of NullUserException's Theme Switcher userscript to browse the site with the Beta theme: 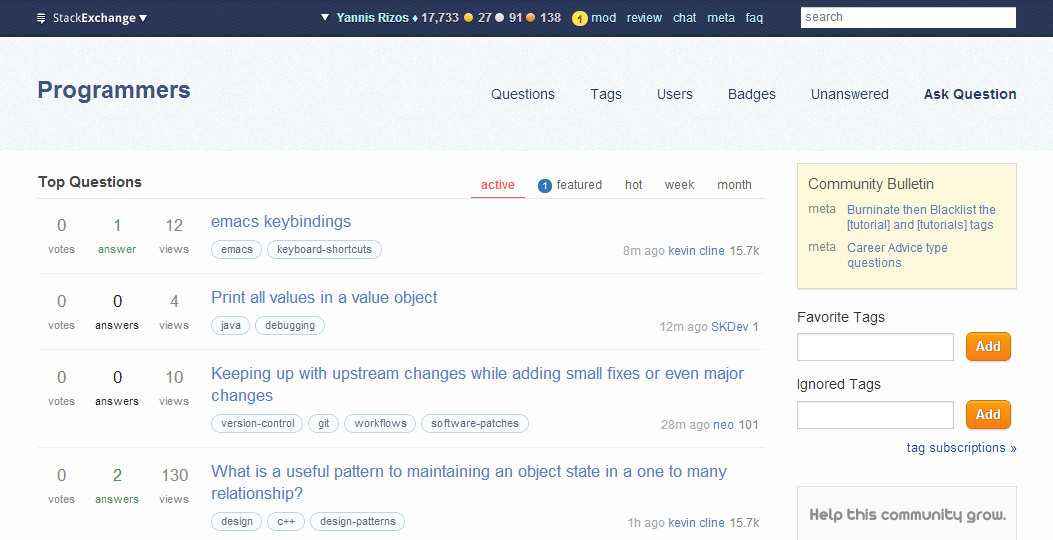 Although it's a very basic theme, I find it quite more enjoyable than the actual theme. But, who cares what I find enjoyable or not, this discussion is about identifying flaws in the design that are a bit more important than personal preference.

First, the whiteboard concept. As you probably already know, the core concept of our design is inspired from this paragraph of Introducing programmers.stackexchange.com:

It's a great concept, and I'd be lying if I pretended I have a better idea. That said and while a whiteboard is an easily identifiable element of the software design process, it's also supposed to be ephemeral and sloppy. And basing the entire design on handrawn elements comes out more as sloppy than casual and/or conceptual. I don't know if the playful nature of the design was intentional or not, and I might be completely wrong but I feel that the original, more relaxed scope of the site was taken into consideration, even though the design was finalized after the scope changed.

The first round of design ideas was a lot cleaner and simpler than the second round and I'm guessing that feedback from the community played an important role in what appears to be a very drastic change in direction. The community back then was more accustomed to the old scope, and if you read through both discussions you'll find out that differentiating the site from Stack Overflow was considered quite important.

And it was, but I don't think it is any more. Programmers being defined by what it's not, rather than what it is has been a constant PITA for the community, and I really don't see why it should be such a big part of our identity now. We've gone a long way, we've certainly proved that we can stand on our own, and I'd really love it if the site's design and overall branding reflected that.

I'm not suggesting completely dropping the whiteboard concept (at least not until I come up with a better idea; expect a long wait), just that we're overusing it. Almost every design element has a hand-drawn look and feel, using Hugh Laurie's handwritting as our main font is completely nonsensical (more on this later), and nothing in the site says "professional". Our design is far from clean and simple, in contrast with almost every other Stack Exchange site that targets professional audiences. Compare it, for example, with:

Even sites that mostly target enthusiasts, like Bicycles, have cleaner and less playful designs.

I never understood why Hugh Laurie's handwritting was relevant to a site about conceptual questions on software development. I can certainly appreciate the nerd value, but:

All we're gaining with the font is nerd value, and I'm afraid going for nerd value on a site that's striving to be the resource for conceptual software development questions isn't really a good idea, it's a quirky in joke that's fuelling a bad stereotype.

Can the design be changed?

A complete re-design is probably out of the question. Jin, Stack Exchange's designer, already has a huge backlog, even if we only consider the custom themes of the Beta sites that are graduating. However I always felt that Programmers didn't really have the benefit of the normal process, with the drastic change in scope, and I'm hoping we could at least persuade Stack Exchange to at least consider taking another look at our theme, and perhaps we could just tone done some of the more playful elements. A few ideas:

And while we're at it, we could also fix the damn links ;P

I want to make it abudantly clear that changing anything in the design, even a complete re-design, would probably do nothing at all to prevent low quality questions coming in. If that's our reason for changing the design, there are quite a few other things that we should improve first that would be far more beneficial in communicating what the site's about and what our general expectations are (stop upvoting crap, for example).

I do feel though that a less casual, less playful design would help better communicating the site's purpose to our target audience. I had to explain the handwritting font a couple of times, and the response was less than enthusiastic, for more or less the reasons I explained in the mini-rant. My main reason for advocating for a cleaner, simpler, and all around more professional design is that it would help me advertise the site on professional communities, without having to explain quirky in-jokes or the no longer relevant need to differentiate ourselves from Stack Overflow.

Honestly, I like the theme. I find the hand-drawn, hand-written, squiggly-line vibe to be indicative of what this site is about--whiteboarding questions. You could migrate it to something more techy-looking, but that would only further blur the line in most peoples' minds between Programmers Stack Exchange and Stack Overflow.

Obviously, I can't say what I would think if someone were to pitch out a brand new design. I may very well like it better, but I do not at all think the current theme to be inappropriate to the site content.

There has been a precedent of a site receiving a redesign, but it had to do with branding rather than any dissatisfaction with the existing design. In fact, the new design on Arqade is mostly the same as it was on "Gaming" back in the day.

Far as redesigning Programmers goes... I'm sorry, but it's at best extremely unlikely. There are certainly issues here and there that could be fixed up, but a complete redesign isn't going to happen.

We have one designer (see if you can spot him!) and no shortage of design projects and things that require his attention. Just going purely by priorities, even if we agreed to redesign Programmers, it simply wouldn't happen in the foreseeable future.

We do our best to come up with a design that represents the community and reflects the scope of the site, but it's impossible to please everyone, so once the design is set... for better or for worse, it is what it is.

I've made this argument before and I'll make it again: other professional questions and expert answers are what attracts more professional questions, not the font style or the site logo. Granted, a site rendered in, say, Comic Sans wouldn't exactly inspire confidence, but we're not talking a garish Geocities-like eyesore here.

My advice is to identify specific issues with the design (like, say, ALL CAPS ALL THE TIME) and make feature requests/bug reports about those. I can't promise that all, or even most, of those will be fixed, but we'll do our best as we get the time. In the meantime, focus on the questions and the answers. That's where the true strength and purpose of the site is.

(Fun fact: we're hiring a product designer. If you know someone who would fit the bill, please send 'em our way before Jin rebels.)

Sounds like something that could be A/B tested. We're programmers, after all, we could do this properly.

Risking the downvote here, as this is a random answer.....but considering what Programmers is all about, why not use elements of a puzzle? (The 2D cardboard ones, I mean.) I understand the whiteboard theme, but I agree that it doesn't work well. Puzzles share a lot of the same metaphor and are more easily understood by non-programmers (and people who weren't in on the original in-joke; I never knew the Hugh Laurie thing when I first came here - I just thought that the design was really slack).

As programmers, we solve puzzles every day. Perhaps that can be a central part of a new site design.

I definitely agree. In my opinion the sites doodley theme makes it hard to read and really take seriously. I'm not saying the site has to have a clinical html-theme, but a little more subtlety would not be a bad change. I think stackoverflow's theme looks really nice, and it would definitely be a good model.

To the graphic designer: I think the doodley theme is really well done, just not necessarily the right place.

Not the answer you're looking for? Browse other questions tagged discussion feature-request status-declined design .

81
Site Design, round 2
41
The Six Subjective Question Guidelines -- Enforcement Notice
57
Renaming the site to match its FAQ or changing the FAQ to match the site name?
16
Design Ideas for Programmers Site [Closed]
18
It is possible to change the colors of hypertext links?
10
What to do about the proliferation of bad questions from generic accounts?
21
What's this cohhunity bulletin?
6
That's not really an ampersand, is it?

0
Once all the disciplining is done and P.SE is purely professional, will it be merged with stackoverflow?
1
Is there a market for "which language to learn, which book to read" questions?
7
If your question would be of interest to professional programmers, you should ask it on Programmers, not on Stack Overflow
8
Can questions be improved by asking for the historical record?
1
Questions related to "deliberate practice" are all marked duplicate, locked, or closed
2
Are our judgments of "too broad" too broad?
24
Code formatting, ratio checks enabled
2
Software Engineering's updated site theme is live!