Most side panel advertisements/promotions that I recall have a non-white background. However, http://i.stack.imgur.com/Ihs34.png (Programmer blog promotion) has a white background. When compared against the background on Programmers.SE (#f7f7f7), this shows a subtle but noticeable difference (a part of the screen looks oddly cleaner than the rest).

Not related to the color, but if someone is going to change it...

This is what I came up with: 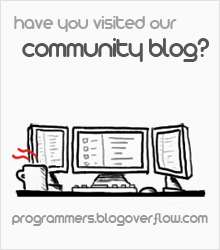 I've already posted it in the 2013 Community Ads question, if you like it you should upvote the answer there, and the ad will start appearing automagically. And if you don't like it... well you should have seen the first draft (I even managed to misspell programmers!).

3
Bug: Background image looks like gunk on monitor.
5
“Flag” image inconsistancies
6
The size of user profile image in this forum is smaller than in other forums, why?
0
Background image makes the text into jpeg artifacts when used with citrix terminal client
12
Could we add a description field in the image uploader?
2
Programmers SE Menu - Whitespace Doesn't Link