Is high-profile user attrition a sign that a subjective SE won't work?

I recently read: Where did Pierre 303 go? He was an all-star!

I understand that there are issues/difficulties that I'm ignorant of, and everyone wants programmers to be the best it can be, and a community to be proud of and a lot of people work hard to make it good, but have there been signs that it is a community that isn't compatible with the StackExchange engine?

Users leave Stack Exchange sites for all sorts of reasons.

Users leave Stack Exchange sites all the time. They usually just abandon their accounts, but I suspect that more are requesting that their accounts are deleted. This is purely anecdotal and an impression on my part - the team would be the only people who could answer this definitively (but I suspect they wouldn't want to).

You should not read too much (or indeed anything) into the fact that a high reputation user has asked for their account to be deleted.

New users are signing up all the time. I think this is a sign of a healthy community.

Don't use Programmers to judge other subjective SE sites.

The history of Programmers is what caused many of the high-profile users to leave, and I think SE learned a lesson from it and is very unlikely to repeat the same process for other SE sites.

We started out as "Not-Programming-Related", a place for programmers to get answers from each other about non-programming subjects that were popular, but not welcome on Stack Overflow. But "not programming related" was a rather broad scope, so SE decided to change it to "Conceptual Questions about Software Development", and many in the community did not agree with this change.

Also probably closely related is this graph, where you can see where the change in site direction started getting enforced by moderators. Most users weren't aware that the site scope had changed so much until questions started getting closed, which caused a lot of tension in the community. 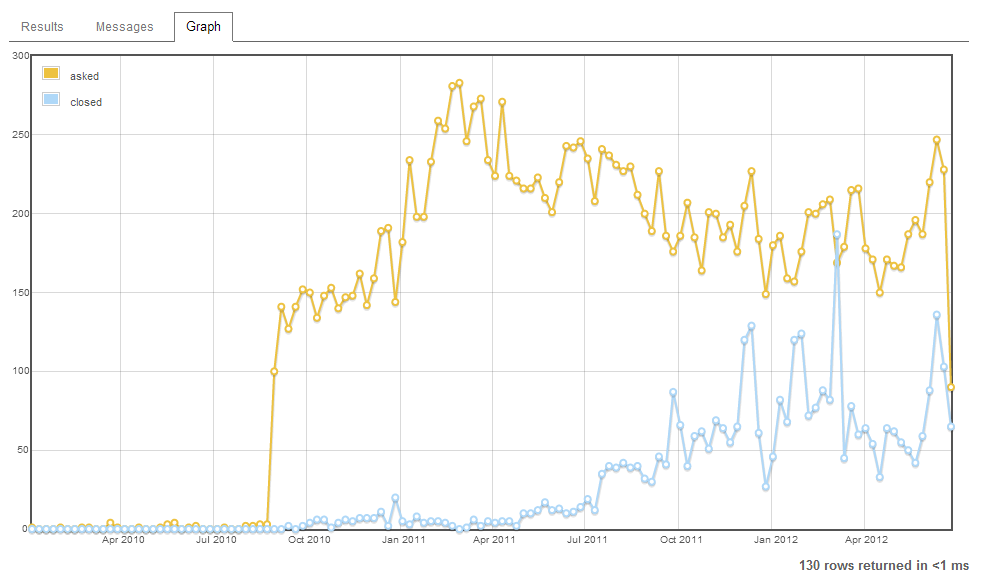 You can view the full history here

But anyways, what I'm saying is you shouldn't use Programmers to judge other subjective SE sites because of its history. This site would probably be fine if it wasn't that it started out as something else, and I think other subjective SE sites would do fine as well providing they have a fairly clear definition of their site up-front and don't change direction after the site has launched.

28
Are we Going down hill?
32
Where did Pierre 303 go? He was an all-star!
47
What is the history behind the site scope change from NPR to "conceptual questions about software development"?

14
Moderator Pro Tem Announcement
6
Do I totally not understand the point of Programmers.SE?
0
Offtopic close reconsideration - Questions about programming tools should be on topic.
7
What are questions where "every answer is equally valid"?
3
Qualms regarding the FAQ (and the behaviour on this site)
11
Should we be concerned that @StackProgrammer tweets refer to closed/deleted questions?