What is “not constructive”?

Jul 20 update: question has been unlocked per discussion in chat and reworded as follows:

Looking for a definitive answer from a primary or secondary source for why did (notably) Java and C# decide to have a static method as their entry point – rather than representing an application instance by an instance of an Application class, with the entry point being an appropriate constructor?
...

I asked a question about the historical perspective of a feature in C# and Java.

It was closed as “not constructive”. Needless to say, I disagree. But more importantly, I don’t understand the reasons. I fail to see what distinguishes this question from, say, “Why does F# have an interactive mode but not C#?”

So what’s the criterion here? Was I just unlucky / the other question lucky? Or is there a distinction that I fail to see? Or could I improve the way the question is asked? I’d be more than happy to.

It had a couple of close votes and a flag - hence my final close vote. However, if it hadn't attracted the flag I wouldn't have closed.

You can (and should) vote to reopen and perhaps look again at the language you used in the question. It could be that the voters and flaggers were under the impression that you were after a discussion rather than something concrete. Unfortunately because of the migration and subsequent close the question is locked.

In that case I'll reopen it, but if it attracts new close votes and/or flags it's likely to get closed again.

update question has been edited and reopened and proposed "draft" has been posted as an answer there:

Prior answer revision is removed since it no longer applies, it is available in answer history:

@KonradRudolph this is reworded slightly better, and slightly more on topic on programmers, but still comes off as your ranty opinion on why ( in your opinion ) why others made mistakes in these implementations you asking for justifications for other peoples design choices and decisions that can't be answered definitively. If they could it would be very easily Googled, which you would of already found the answer quickly, therefore all this is going to generate, even on programmers is speculation and supposition ( this is what all the answers currently are ) and no true answer.

Comments to the contrary of the claimed intent in the question:

"As I said, I’m not convinced by that at all. Objects do get instantiated before, and code gets executed before. It’d need a quote from one of the original developers to convince me that this was the reason."

this comment from an answer below kind of proves you aren't going to get the answer you want unless you contact the original designers in question, anyone else is going to be speculating; this is still not constructive and off topic even with the attempt at re-wording it.

And other comments are just more discussion arguments on why the OP doesn't buy the answer/argument. Matter of fact, all the comments are just arguments support or "debunking" complaints even on the deleted question. I would vote to close again if I could.

"@Yannis True. I had somewhat hoped for an answer from one of the people originally involved (maybe from Eric? though his would probably be “because we copied Java”)."

Then mail the people that did what they did, why do you think polling here will provide the answer you are looking for?

The following quote from the re-worded answer are just unqualified opinion:

Here is the only viable answer I could come up with, I avoided putting it the actual question so as not to contribute to the noise there, but meta is about noise right :-) 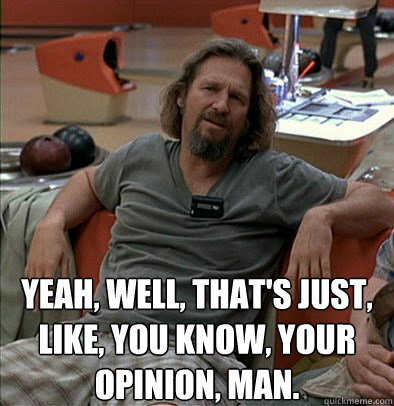 Not the answer you're looking for? Browse other questions tagged discussion close-reasons specific-question .

1
Can questions go into limbo when its migrated (rejected) and on hold?

8
Should we clarify the wording of our "Not Constructive" close reason?
2
What have I missed in asking a subjective question?
4
Question about naming conventions "not constructive"?
2
Are literature requests inherently off-topic or not-constructive
1
How to make "What to expect" question constructive?
12
If the scope is wrong, which of these questions belong here?