Are we Going down hill?

From what I was seeing overall question quality is going downhill, so on that hunch, Using Stack exchange's Data explorer ran the Following Query:

I then Graphed The Count and Average:

Our Average Question Score is Down a full point over the last year, whats going on?

Edit: I Updated the SQL and Added Average Vote count..

Edit 2: For Thomas SO Results 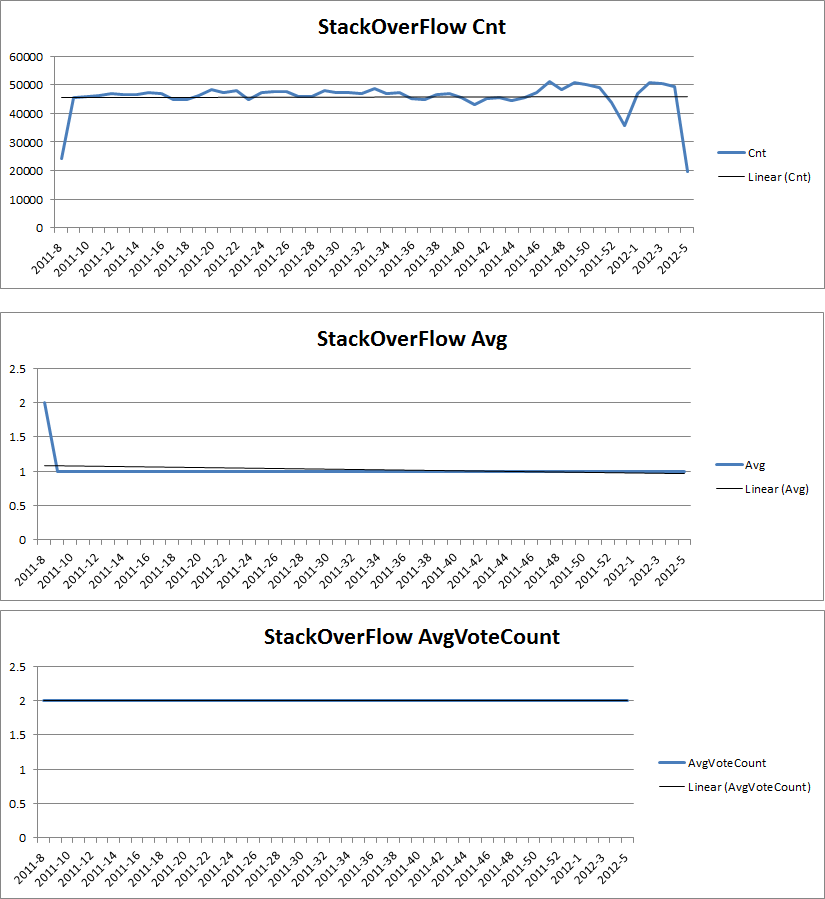 I think we are.

The site scope was changed dramatically from its original proposal, without the consent of the Programmers community, which drove many users away. Since then, strict enforcement of keeping questions on-topic with the new site scope, combined with the fact our site name doesn't match the FAQ has been causing a lot of users to misunderstand what the site is meant for, and to lose interest and stop asking/answering questions.

For example, here's a graph of our new user growth. It remains fairly steady, because many programmers are interested in a site for programmers: 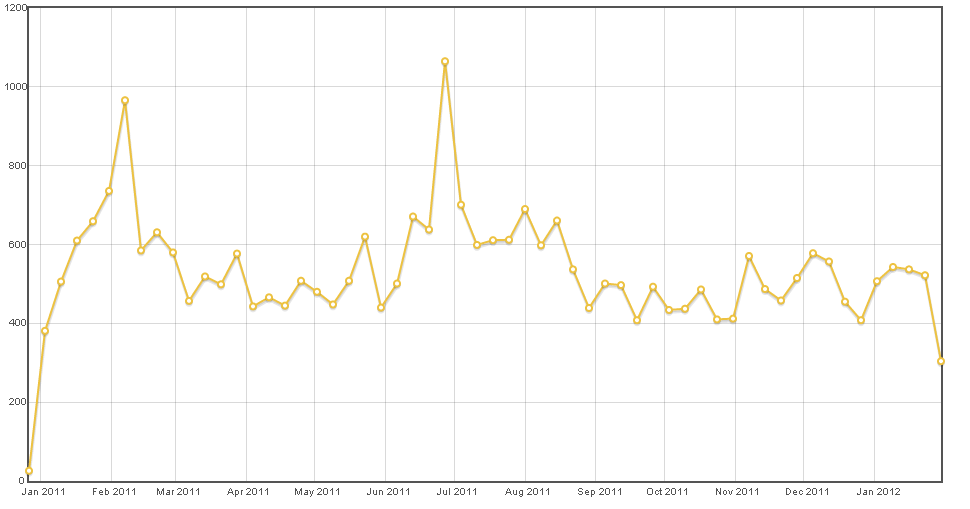 And here's a graph of new questions asked. It is going down hill fairly steadily for a while now, and I don't believe it's because all the good questions have been asked/answered. I think it's instead people being aware of stricter rules, and/or being uncertain about if they should post something for fear of just getting downvoted and closed. 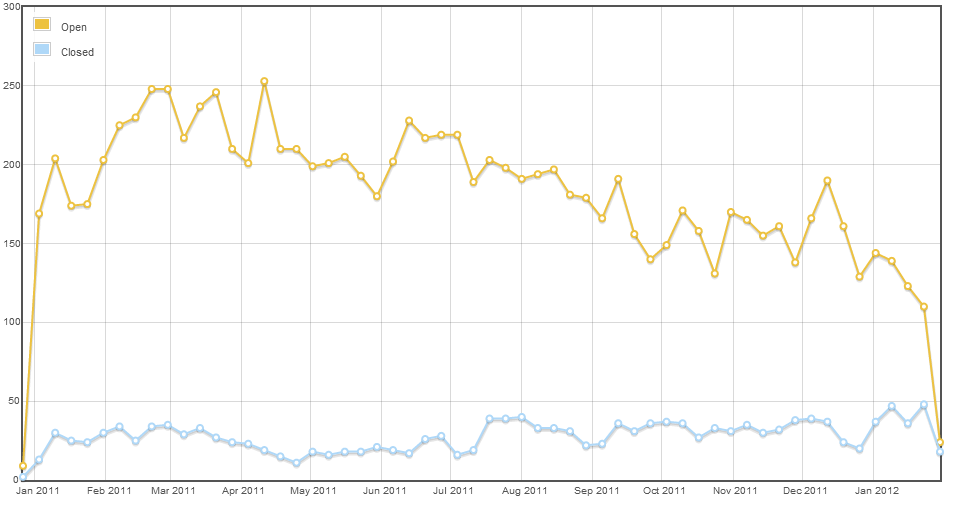 It should be noted that the above graph shows posts which were closed as of 5/10/12 (which is when I noticed I was including answers in my old graph). To view a graph of actual open/close post history, use this query, which was added in May. It should also be noted that some of the larger spikes of posts getting closed can be attributed to the massive cleanup that some users undertook. 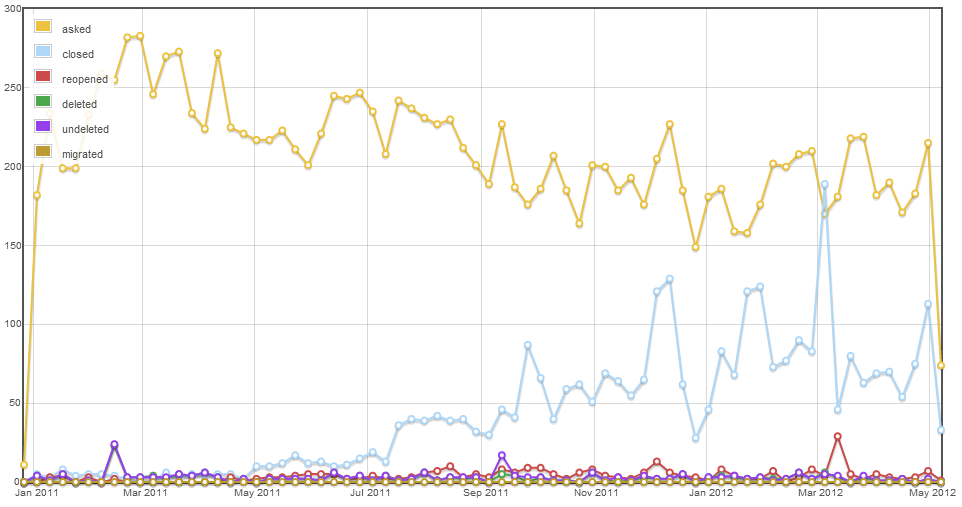 Our number of votes is also declining, which is the result of less user participation. 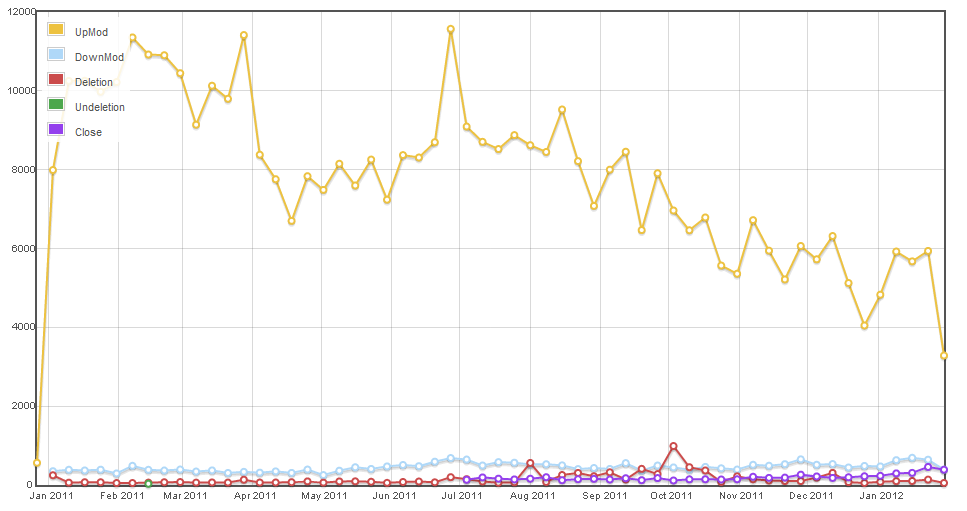 I can't speak for others, but personally I've gotten frustrated with the way our site is going and have kind of given up. I don't think I'm alone either judging by questions on meta, and the disappearance of several formerly-active users.

This site is yours, so you can run it however you want, however I strongly believe that the downward nature of the graphs is caused by a lot of misunderstanding and confusion about the site scope, and the way SE treated the Programmers community when they decided to change the site scope without their consent.

I agree with Rachel... As new sites pop up its takes from this more generic one..

PM Questions get migrated out (PM)

Code Questions get migrated (SO)

Whats left?, Not Much.

Has any new site proposal ever been rejected because We already have programmers?

Its a fact that the number of closures puts off posters, and, it puts people off answering. What is the point of spending ten minutes carefully considering the question, re-wording, correcting your spelling (or not, in my case) only to find the question closed.

Ultimately it puts people of visiting the site.

Programming and related professions (DBAs, Analysts, Systems Architects etc.) are fairly unique, its techie a bit like engineering but we don't have rules engineers have to follow. There is no empirical way to judge a programmers work. Even stuff that plain doesn't work may be good quality programming which was specified poorly.

If we cannot discuss these type of topic here, whats left?

This is a trend we're seeing on Stack Overflow too.

All of the graph results can be explained by the consistent, persistent effort by the community and the moderators to remove bikeshed questions.

I personally think this is a good thing. While the potential audience is smaller, the audience that remains has a higher percentage of experts in the field, and not just people who want to talk about the "best eraser for programmers."

With the exception of StackOverflow, I find this information promising actually...

The question scores are merely falling in line with the actual average quality of questions in Programmers. There have always been bad questions on Programmers, but up until recently, more active users finally understand the scope of the site and care enough to participate in meeting that vision.

Here is an example of a question that should have been heavily downvoted and closed with impunity. The answers are by far and away even WORSE:

No offense Pierre, but we were all fresh users at one point before we really understood what this place was about.

I guess it's all my fault

0
More evidence that we are going downhill
83
Are you still confused about what Programmers (now called Software Engineering) is for?
42
The Six Subjective Question Guidelines -- Enforcement Notice
57
Renaming the site to match its FAQ or changing the FAQ to match the site name?
47
What is the history behind the site scope change from NPR to "conceptual questions about software development"?
32
Why are there so many closed, on hold, and down voted questions here?
3
Frequently closing popular questions
8
Is high-profile user attrition a sign that a subjective SE won't work?
10
Voting on questions that might fall in the "All Careers" circle of FAQ
6
Are people less easy on the up-vote button?
See more linked questions

4
What are the guidelines for down-voting?
20
Answers quality in hot questions
32
Why are there so many closed, on hold, and down voted questions here?
14
Cutting down on off topic posts
2
Why was this question voted down?
2
Why are so many questions down voted?
15
3-vote close - how's it going?